Early January we turned my studio upside down. Actually, a few days ago I still found bits of cotton wool sneaking around.

A few days previous to this session, Damaris (the model) introduced me to Anna (the MUA), a talented artist from our hometown Oradea. As I mostly shoot outdoors, I wanted to experiment more indoors during the depressing winter days and try my hand at beauty photography, something I have quite neglected over time. Damaris & Anna were also eager to create something new so, long story short, we decided to get together and do a beauty series. We found a theme based around colours and came up with the rainbow idea. We wanted it to be fun, crazy and out of the ordinary. Anna made a few amazing illustrations with her make-up proposals for the series to have an idea of what we were going to shoot and Damaris brought with her all the random expressions possible.

To give the idea of a rainbow between clouds, we used LOADS of cotton wool and struggled with getting it to stay in place. By the time we finished shooting, there was cotton wool and hair spray all over the place.

We imagined it would take us a few hours to get the whole 6 looks done, but it turned out we needed two afternoons extended to very late evenings to finish it all.

The results: a gazillion awesome captures that made my life a nightmare to select just a few best ones. And, bonus, some of them made it into the April issues of Ellements Magazine. 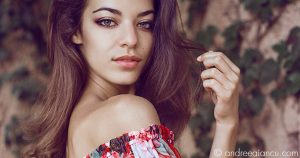